I wanted to take an opportunity to highlight this fantastic blog post a friend and colleague of mine wrote on Feature Toggling.  The original article can be found on Martin’s blog at: https://mashort.github.io/design/2017/03/04/feature-toggling-for-pain-relief.html and is repeated below with his permission and so I’ve always got it handy.

Thanks and happy reading…

While working as consultants on an Enterprise level ASP.NET application, my colleagues and I became aware of a recurring pain-point that the in-house development team were suffering from.

The team are committed to a monthly application release schedule.

We thought that this was a good use case for feature toggling to provide some relief to this problem.

So what exactly is Feature Toggling?

Feature toggling is a development design pattern that provides an alternative approach to maintaining multiple source code feature branches with the added benefit of being able to turn application features on or off at will.

In practice, Work-In-Progress features are wrapped in a conditional if…then statement in code and deployed to production in a switched off state, with the ability to switch the feature on at a later time without requiring re-deployment of the source code for that feature.

Feature toggles can provide many benefits including…

The concept of feature toggle-driven development has been around for a long time. In fact, the well respected software design & architecture author / speaker Martin Fowler is one of the people credited with introducing the concept – see his Feature Toggle article.

Other good resources I found were Feature Flags and the excellent Launch Darkly best practices guide.

There are two main categories of feature toggles:

Feature toggles can be used to control:

There are many 3rd party libraries available to assist in implementing feature toggles in your application. I’d recommend using one of these rather than rolling your own.

We decided to use Jason Roberts excellent open source FeatureToggle library for the following reasons:

For this example, the following environment was used:

In Visual Studio, install the open source FeatureToggle library via NuGet and add it to the projects where you want to use it…

Notice that a package dependency FeatureToggle.Core is also installed. 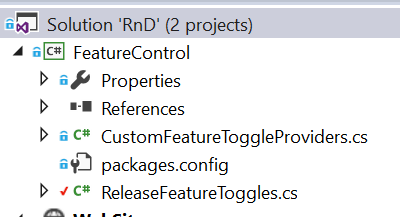 OK, so now we’re ready to create a new feature toggle and use it in code. Lets start by using one of the built in toggles that come bundled with this package.

Create a new class for each feature you want to toggle in your application. I like to create a container class to keep all of my Release feature toggles together, that I can then add my feature toggle classes to…

Note that our new feature toggle class needs to inherit from one of the FeatureToggle base classes (e.g. one of the bundled toggles) – in our example we’re going to use the SimpleFeatureToggle.

In our example we’re using an ASP.NET web application, so we need to set the on / off state for the new feature toggle in the web.config file…

Using the Feature Toggle in your code

What if i want the Feature Toggle to get it’s value from a database, rather than a config file?

If you want the flexibility of storing and controlling the feature toggles on / off state from a database rather than from a config file, then fortunately there is a bundled toggle called SqlFeatureTogglethat does just that and here’s how you use it…

Create a Feature Toggle class that inherits from SqlFeatureToggle

Our new class added on line 7.

This time we need to set the on / off state for the new feature toggle in the web.config file, in a slightly different way…

Important points to note here are:

Using this Feature Toggle in your code

Done, the feature toggle on / off value is now coming from a database!

What other toggles come bundled with this library?

You can learn how to use these from the FeatureToggle documentation.

As we’ve seen, the toggles that come bundled with the FeatureToggle library use configuration files as part of the mechanism to get a toggles value.

Note that a custom toggle provider class must:

In this article we’ve had a general look at feature toggles, what they can be used for and how they can be implemented.

There are recommended best practices that should be considered and also Business feature toggles to be considered.

Get updates via email